Bedtime is my favorite time of day. It used to be the time right after the bedtime routine was my favorite.

When Cole was little, I’d pull his door shut, and do a little dance in the hall and whisper “yes. Yes. YES! yyyyyeeeeeess!”

When Cole was little, I ruthlessly pulled apart the bedtime routine until it had the fewest possible pieces and took the shortest amount of time. Bathroom. Teeth. Books. Song. Done.

When Cole was little, it always, always took him 45 minutes to fall asleep. He would lie there, happily in his crib, and narrate his day. No matter how early or late we put him down, he needed that time to transition. “First, we go park. Then big big dog. Woof. WOOF. Lunch…mmmm…” The words would slowly start to slur and the space between sentences would elongate. Then, blessed silence.

Once, after listening to 11 rounds of Jingle Bells, my husband went in and told him it was time for sleep. All we heard for the next 20 minutes was “I don’t know wwwwwhhhhhhy Dada does not want me to sing Jingle Bells.”

For a few years in the middle, he grew silent. Still awake, but not saying any of his thoughts out loud. Some nights he’d ask for paper to write things down. Other nights he’d pop in and out of his room, restless with too much swirling in his head.

And now? It still takes time. Still about 45 minutes. As a teenager his bedtime is the same as ours, so once the last light has been turned off and everyone has climbed the stairs, he comes in and flops on our bed. Closes his eyes. And talks. It is these last 45 minutes of the day when his body is still enough, the time is quiet enough, and we are lucky enough that he wants to talk about his day—with us.

Still-ish. Quiet-ish. Lucky-ish. This is a teenage boy we’re talking about. Some nights, the two guys get into a wrestling match, and I get inadvertently kidney punched. Some nights their tickle fight creates so much laughing and flailing, that I am clinging to the far edge and worried he will wake his sister. I end up hissing “Bed. NOW!” But I don’t really mean it.

Which he knows. So he’ll blithely ignore it with “oh, hey Mom, one more thing…” He’ll tell us about his friends. His classes. His activities. And sometimes, sometimes, about his heart. Then he’ll trundle off to his own room for the night.

When Cole was little, the number of bedtimes seemed endless. Now, it seems there are so few left with him at home I could count them on a single hand. Neither of those are exactly true.

What is true is that I cannot remember exactly when things switched. There wasn’t a day when one bedtime pattern changed to the next. It wasn’t that distinct. Transitions take time.

And transitions are hard. Just ask our kids. How many times do we tell them what is coming next, and they still meltdown between the legos and the front door?

Because transitions are more than change. They are embracing the unknown. And leaving behind what is familiar, what is cherished, what is loved. Which means that transitions aren’t always smooth. Or subtle. There is sadness with transitions—even the great ones. We are lucky, our kids are lucky, when transitions happen on time, in the way we expect. In those moments, the transition is tinged with privileged grief.

As our children take their first steps we are thrilled, and yet wistful for the crawler they were moments ago. The first wobbly pedals on a bike bring us joy and a hint of sorrow. Pulling out of the driveway for the first time behind the wheel? Equal parts freedom and terror.

It turns out having difficulty with transitions isn’t a trait we outgrow.

Someday soon, not-so-little Cole will be heading off to college. That feels very final. Bedtime won’t be happening here. And someday after that, not-little-at-all Cole will be talking to someone else at bedtime.

Someday. But not today. Today I still get to hear “oh, hey Mom, one more thing…” 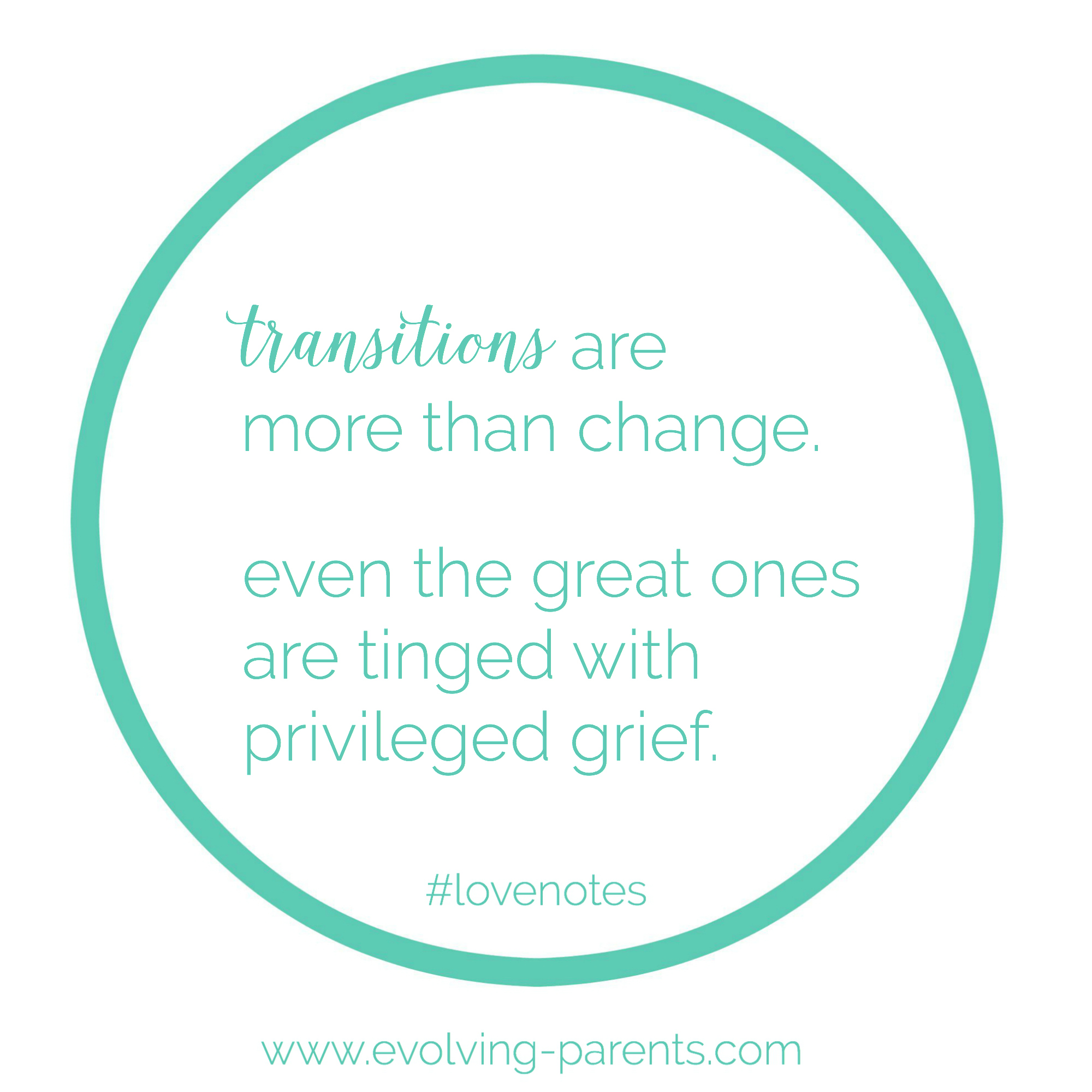 love the love note? you can pin it!
.
What transitions have happened at your house? Were they expected? A surprise? How did you feel? We each have a story. I’d love to hear yours.
.